ATTENTION: the database model file structure has changed since the last stable 0.9.3. Models created in older releases will certainly fail to load due to incompatibilities because some attributes in the XML code don't exist anymore or have changed during the development of 0.9.4-alpha1. Before loading your database models in this new release, please, make sure to have a backup of them and follow the steps presented by the model fix tool to correct the documents' structure. Not paying attention to this situation may cause irreversible data loss! If the fix procedures aren't enough to make your database models loadable again, please, ask for help at the official support channels!

Here we are announcing another pgModeler release. This is always a joyful moment for me, especially, in these complicated times in which we all are living due to this damn pandemic that still persists! Well, in the past two months, I was working hard to polish what was released in 0.9.4-alpha as well as to bring some new features, not necessarily accessible directly by the user, but that will certainly improve the overall experience with pgModeler. Additionally to traditional improvements and bug fixes, I started to prepare the codebase for pgModeler 1.0 that I will start to develop as soon as the stable 0.9.4 is out. Said that, let's see in detail some key features of 0.9.4-alpha1!

This is an old improvement that I wanted to implement but never found the proper way to do that, until now. This new release allows the user to drop databases quickly just by clicking the button

aside a selected item in the database listing or hitting Ctrl + Shift + Del. In previous versions, the procedure to drop a database in SQL tool was to browse the database first and then to click the same icon at the top of the database browser widget. The old way to drop databases in GUI was kept in this release but it tends to disappear in the future since it is way more complicated than the new one introduced.

Attending to requests, 0.9.4-alpha1 introduces split export mode. In this mode, instead of generating a single SQL file representing the entire database model, a file is created for each database object. Note that the files are named in such a way to represent the proper order of creation (see below), thus, running the scripts one after another will create the whole database like it was created from a single file. This mode can be useful for custom deployments processes where you need to create objects one by one in the database server while performing any other parallel task needed by your development tool. The pgModeler's command-line interface also supports this new mode, just provide the parameter -sp or --split while using the export operation--export-to-file. 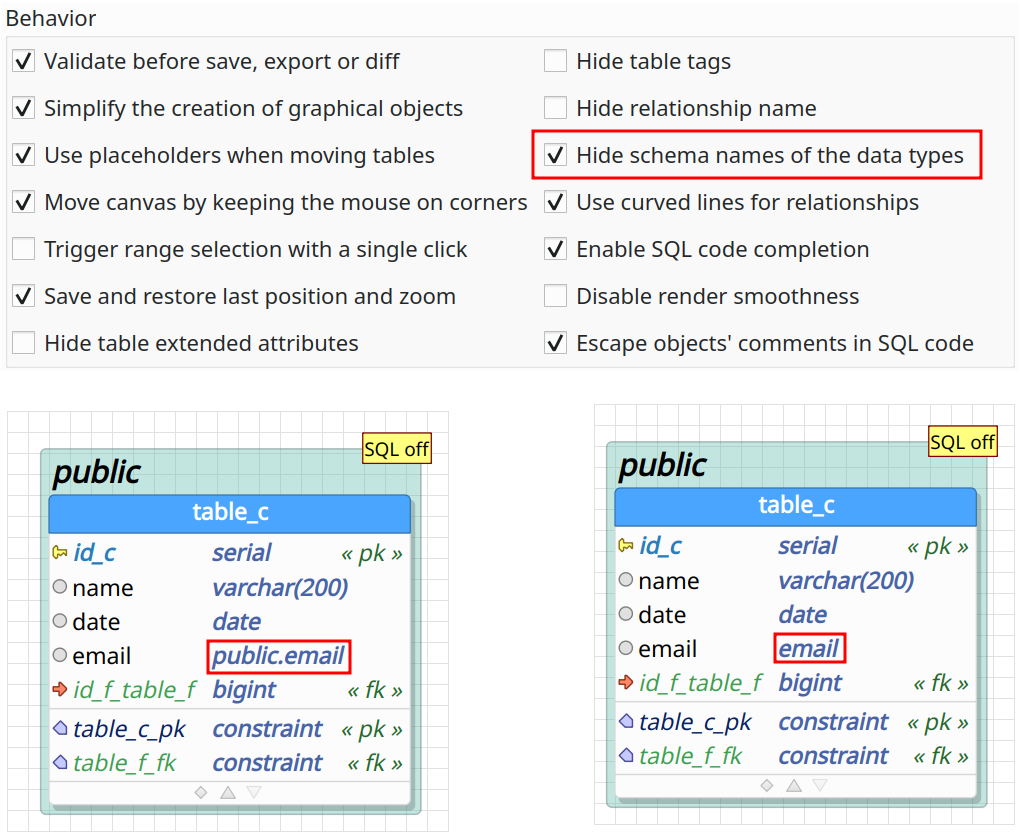 Due to the need to constantly edit schema files for code generation test purposes, I decided to create my own mini-editor called pgModeler Schema Editor (pgmodeler-se). The idea to create the application pgmodeler-se came from the lack of native support for *.sch on my preferred editor (hello, Kate!). In fact, Kate can handle this type of file with some tweaks here and there but I found it more complicated than creating a small editor from scratch since I had everything I need in pgModeler's codebase.

With this auxiliary tool, an advanced user can manipulate the schema files stored in the schemas folder. You can, for example, change the default SQL/XML code formatting, add extra instructions to the generated code, validate the syntax of the documents, apply automatic indentation, and much more. The application also allows you to tweak the syntax highlighting files (SQL, XML, or SCH) either in the user's local storage or in the pgModeler's installation folder. Of course, this application is not for every user since it may break your pgModeler installation if some wrong edition is made on any file that it handles. So, use it with caution! :) 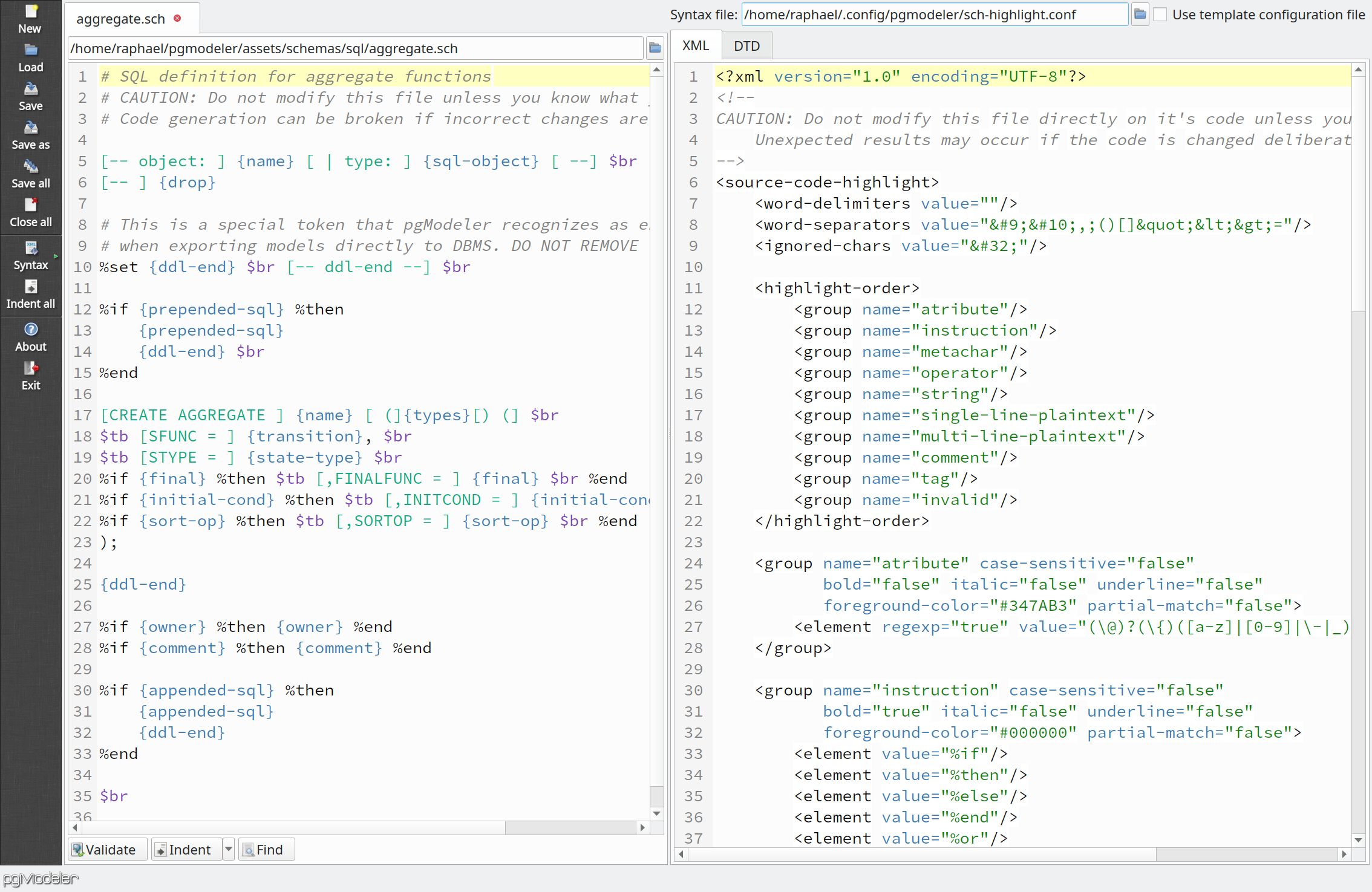 It's no secret that, for a long time, I want to start to work on pgModeler 1.0. So, since pgModeler 0.9.4-alpha, I'm making small changes here and there to shape the codebase into the final form I want to 1.0. This time, I made some important changes in the folders in the source code root. The first change was to rename all the remaining icons from Portuguese to English and performing the needed changes in the source code. Some unused or outdated files were removed too.

Finally, the last change made in the source code root was to create a folder called assets and store in it all the files that are deployed with libraries and executables, for example, code schemas, language settings, configuration files, and database model samples. These changes don't affect you if you just compile and use pgModeler. But if you're a plug-in developer or a package maintainer, or even have a custom code running over pgModeler's code you may need to review your build process in order to check if something is broken after such changes.

Some other enhancements and fixes that worth to mention are:

There are many other fixes and you can check them in the file CHANGELOG.md. Anyway, I'll be here waiting for your feedback on this new release. Leave your thoughts in the comments sections that I'll gladly respond to them, and if you stumble on any bug or problem running pgModeler don't hesitate to ask for help at the GitHub issues page.

Enjoy pgModeler and until next time.