The comparison or diff process in pgModeler consists of generating a set of SQL commands that will make both model and database synchronized. In the most recent versions of the tool, there's a possibility to compare two databases as well. In detail, the comparison is made from model to database, meaning that any object existent in the model and absent in the database will be created. In the same analogy, any object absent in the model and present in the database will be destroyed in the latter. The key idea here is that the model is the main reference meaning that any change made to the database that is not in the former is completely ignored. This is useful to keep the model always up-to-date because the user needs to alter first that one and then apply the changes to the database.

The process itself is quite simple, first, pgModeler will generate a temporary model based upon the database to be compared using the reverse engineering feature. Once generated the model it's time to compare the objects from the input model (the reference) and the ones present in the temporary one. Any detected difference is stored and processed later resulting in a set of SQL commands that may create new objects, destroy old ones or just alter the structure of the current ones. When the comparison finishes, the commands are ready to be applied to the database. At this moment, depending on the settings defined by the user, the generated commands will be saved in a file or exported directly to the server. In the case of exporting to the server, the user will be prompted to proceed with the irreversible changes to be done to the database. Before confirming the modifications it is highly recommended to make a backup of the database in case something goes wrong.

In newer versions, the support to diff presets was added and it allows the user to save different settings and reuse them whenever needed. This is useful when you need to run the diff process in every stage of software development, let's say, development, homologation, and production. On each of these stages, you may use different diff settings depending on your needs. For instance, in development and homologation, you can force the recreation of objects or even drop objects in cascade mode, but the same options can't be used in the production stage for security reasons. So, with this feature, pgModeler allows you to vary the options used in the diff for different contexts.

Finally, the model-­database diff dialog has a long set of options and they may affect how the resulting commands are generated as well their semantics. You seldom need to change their values but in a few cases, the default settings can't generate the diff as expected so you'll need to tweak them to achieve the desired result. Below all available options are fully described. This feature is still in experimental state and may produce false-positive results or extra/redundant code in the final code, but these issues are being solved little by little. Another limitation of the diff process is that the object's renaming in the model can't be detected and instead of issuing an ALTER ... RENAME command on the diff script the object with the old name will be dropped, so be extremely careful when doing diffs! 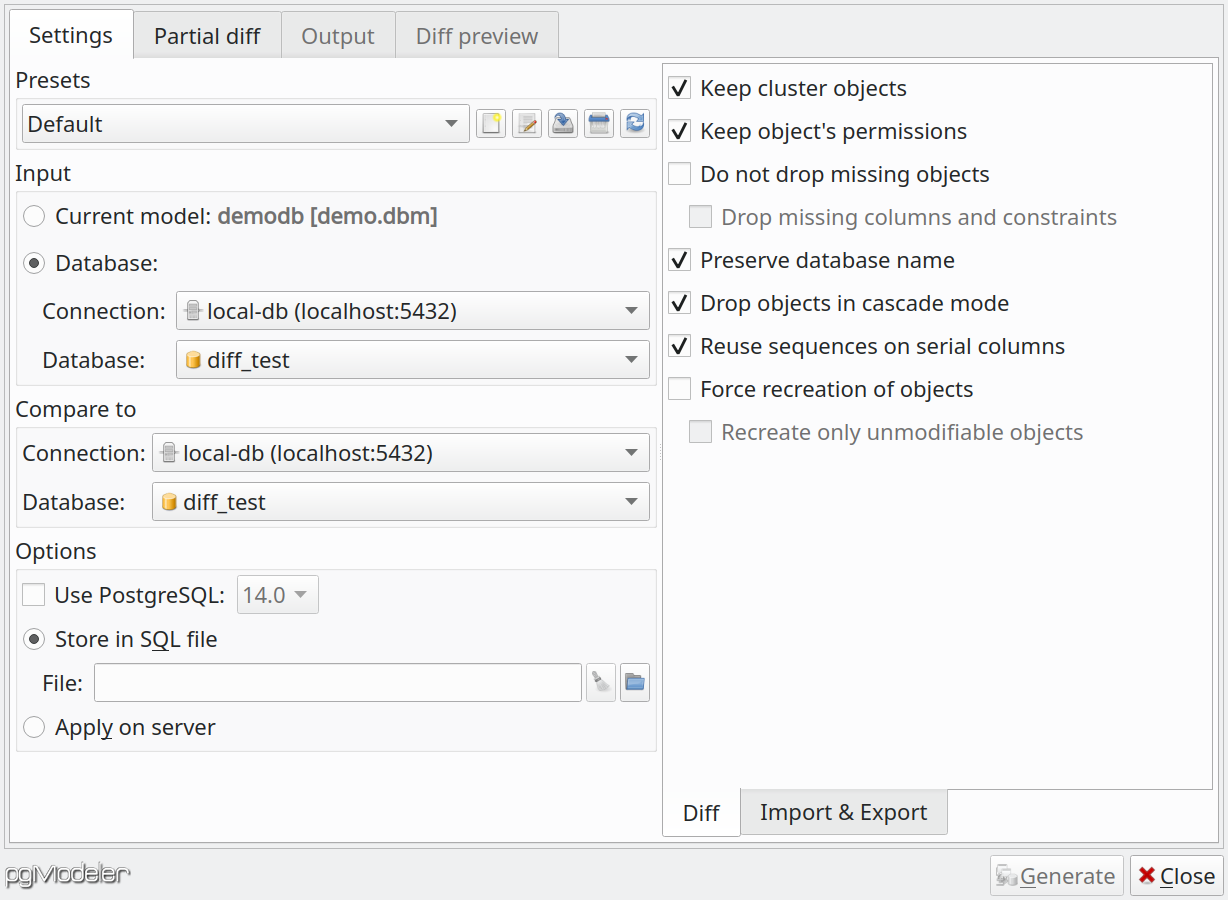 The options available in the tab Import & Export are the same ones used by the import and export processes so the details about them can be seen in the previous sections in this chapter. After configuring the desired options you can start a diff process by hitting the button Generate. The whole process can take a long time due to the number of comparisons done and the size of the involved model and database. Unlike the import, the diff dialog will not be closed automatically at the end of the process because the user can compare other databases to the model using the current settings.

This feature consists of taking an input database or model, applying user-provided filters, and diminishing the number of objects to be compared. This brings us a significant gain of speed in the whole comparison process because only a subset of the database/model will be handled. The partial diff has two ways of filtering objects: 1) through the user-provided filters like the ones used in the reverse engineering; 2) by using the database model changelog to filter automatically the modified objects.

In order to use the partial diff through manual filtering, there's the need to specify a set of object filters composed of the object type and a search pattern (wildcard string or regular expression). Once all the filters are set it's time to retrieve the objects matching them, which is done by clicking Apply in the filter widget. All matching objects will be listed in the Input grid at the right of the Partial diff tab. Now, just click Generate to start the partial diff process. 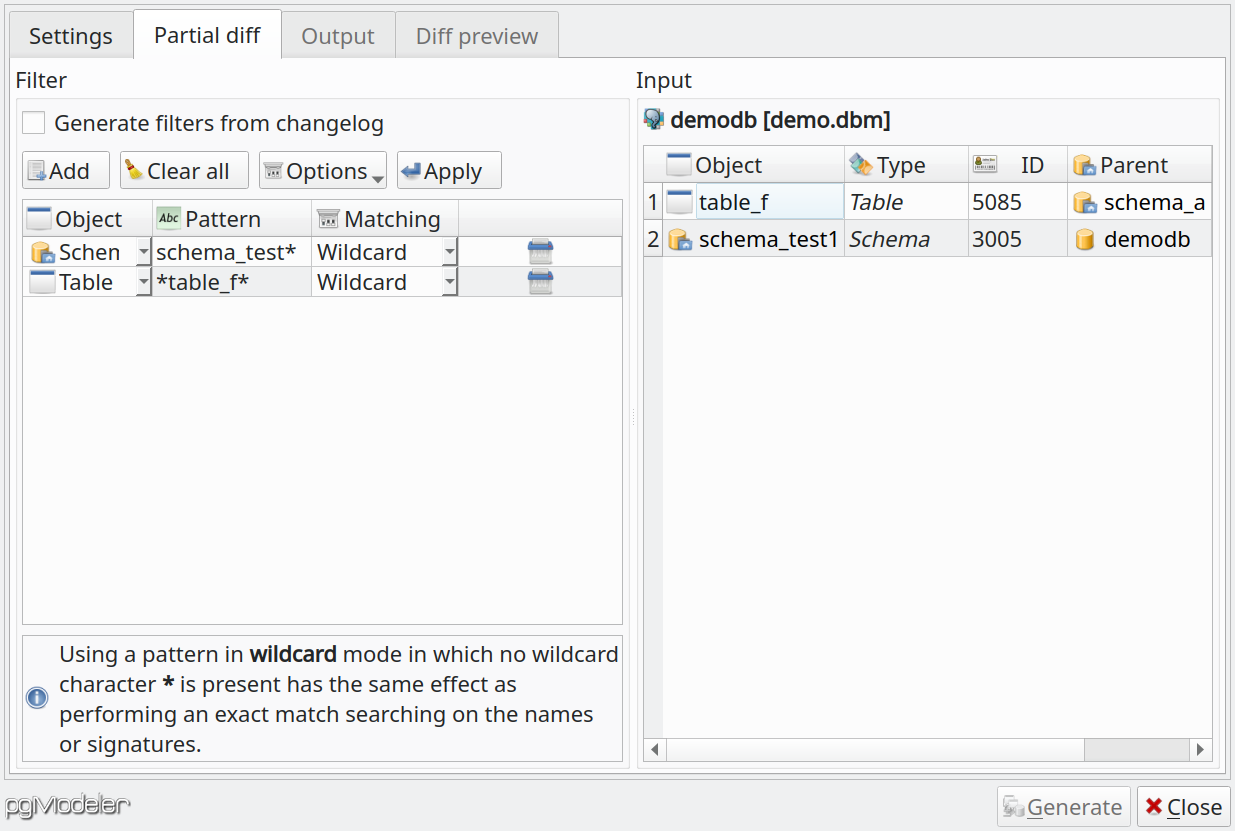 Now, in order to use the filtering based on the model's changelog one needs to check the option Generate filters from changelog and the filter widget will display the fields as shown in the image below. After that, the user just needs to specify a date/time interval that will be matched against the changelog, click the button Generate filters, and then retrieve the modified objects by clicking Apply. Internally, pgModeler generates, based on the objects found, filters like the ones in the below image using object signatures as the filter patterns. These filters are then used in the whole partial diff process so the correct result can be produced. 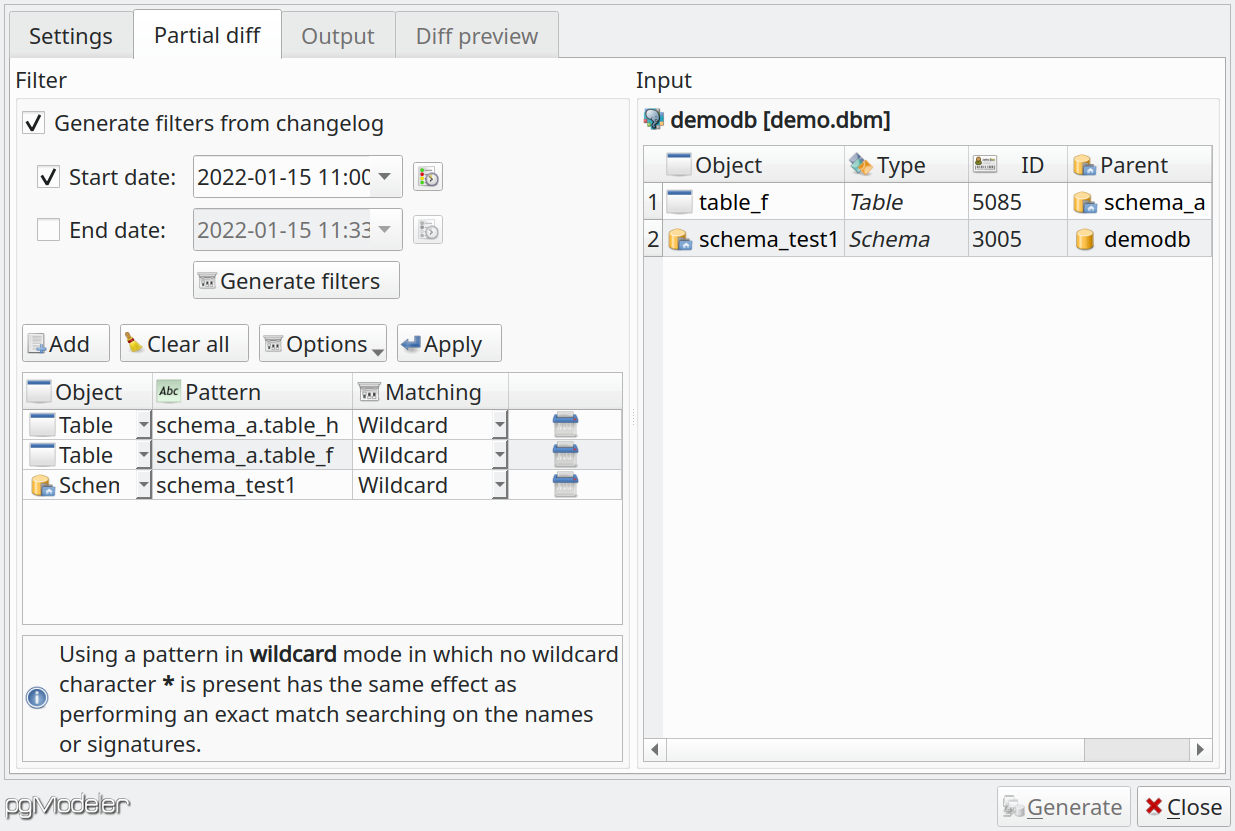