Indexes are applied in a set of columns and are primarily used to enhance database performance. This kind of object is composed of basic attributes and a set of elements with their own attributes which reunited define the index as a whole. In the database model, pgModeler includes indexes at the bottom of tables in a portion called the extended attributes section. The image below shows an example of how an index is displayed in a table. 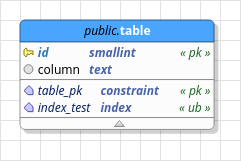 Basic attributes of the index like indexing mode (also called access method), fill factor, predicate, and others are configured in the tab Attributes in the index editing form. Their meaning and accepted values are detailed in the table below.

Index elements can be configured using a column of the table which will receive the index or a SQL expression. Reunited all the elements configured will form the DDL command to create the index in the database. Their attributes are described in following the table. 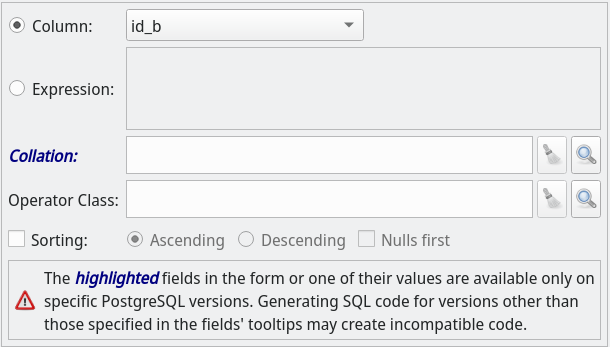 Non-key columns can be used to make effective use of index-only scans, by choosing to create a covering index, which is an index specifically designed to include the columns needed by a particular type of query that is run frequently. Since queries typically need to retrieve more columns than just the ones they search on, PostgreSQL allows one to create an index in which some columns are just "payload" and are not part of the search key. This is done by adding an INCLUDE clause listing the extra columns. In pgModeler, this can be achieved by using the tab Include columns on the index form, as shown below.