Relationships are the entities used to represent the link between two tables or between a table and a view. In order to provide easiness and flexibility when linking tables pgModeler implements nine different relationship types each one with its proper semantics, being them: one-to-one (1:1), one-to-many (1:n), many-to-many (n:n), self relationship, generalization or inheritance, copy, foreign key generated relationship, dependency , identifier and partitioning.

For some kind of relationships (1:1, 1:n, n:n) there is a mechanism called column propagation which automatically creates columns and constraints in one of the involved tables. Columns propagated by the relationships are automatically named and graphically represented in different format (by default they are the ones with a green text color and italic font style). Normally these objects cannot be modified directly and in some cases pgModeler will raise errors if the user try any operation like delete or modification on them.

There are two special relationships that are created automatically in certain cases and cannot have some of their attributes handled directly by the user: foreign key generated relationships (in short, fk relationships) and relationships between tables and views which are used only to denote the dependency of the view to the linked table.

Relationships can have their own attributes and constraints where these latter are obligated to be associated to the former ones. The attributes are converted into columns when the relationship is validated and connected to the tables.

The semantics of this relationship is: “an item in table A has linked to it one item of table B”. In practice, foreign key columns in tableB are filled with the values of primary key columns of tableA. The restriction here is that two different items tableB can't reference the same item on tableA. In order to ensure this uniqueness a unique constraint is created and assigned to the foreign key columns in tableB. The column propagation is available for this kind of relationship and depends on the cardinality combination used as seen below:

Self relationship works likewise the regular 1:1, 1:n and n:n relationships, which means, all rules of cardinality and object creation applied to them are valid for this kind. The difference is that only one table is involved and it is linked to itself. To create a self relationship the user shoud press and hold Shift key when using the relationship tool before clicking the desired table. The image below shows an example of a self relationship. 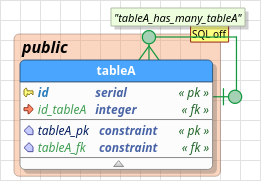 This kind of relationship implements the table inheritance as PostgreSQL does. Visually, columns are copied from parent table to its the child, in the image below, from tableA to tableB. One point must be observed here, the columns are copied to child table but will not appear in the generated SQL code since is PostgreSQL the responsible for handling the inherited columns. Also, as in PostgreSQL, if the same columns exists on both tables they will be merged on the child only if their data types are the same. In practice, the columns on the child table are kept in their original configuration. When the columns are incompatible pgModeler will raise an error and abort the relationship creation.

Finally, when creating a generalization only check constraints are copied to child tables, if and only if the No inherit attribute is unchecked in these constraints. Other kinds of constraints aren't copied and the user should recreate them on the child table if they are needed thus it's quite important to be careful when handling multiple inheritance due to this situation.

Copy relationship partially implements the table copy as PostgreSQL implements through the usage of the LIKE keyword. Unlike the inheritance, a copy relationship will not merge columns that already exist on the derivative tables, instead an error will be raised, this because the premise of copy is create a table completely decoupled from its parent one.

Observe the slight difference between an inheritance relationship on the previous section and the copy relationship on image below. The dashed line of the latter only denotes a transient dependency between the involved tables because the child depends on parent only at design time due to internal validation reasons. When the model is exported to SQL code two decoupled and independent tables will be created. Even the reverse engineering feature isn't able to identify if a table was originally created from a copy relationship.

This special relationship has the same semantics as the one-to-many but the user can't directly modify it, except for its basic attributes like name and position of the labels. This object is automatically created whenever the user manually adds a foreign key to a table, thus, pgModeler detects which table is being referenced in the constraint and link the two tables. Unlike the original one-to-many relationship this one doesn't accept any attribute or constraint. The only special behavior of this relationship is that if the user delete it from the model the foreign key that generated it will be wiped out from the table as well.

This relationship is similar to the copy one in style and semantics but its applied to denote a link between a table and a view. Additionally, this object can't own attributes or constraints and the user can only handle its name and label position.

In PostgreSQL, table partitioning refers to the action of splitting one large table into smaller physical pieces. There're several benefits that we can gain from this technique, for instance, improved query performance, separation of data that are frequently accessed from the seldom accessed data and many others. In previous pgModeler's releases, there were some ways to simulate table partitioning (as well in PostgreSQL 9.6 and below) by using a combination of inheritances and triggers which could be very difficult to maintain in certain situations. So, in pgModeler 0.9.2, the declarative table partitioning introduced by PostgreSQL 10 and improved by the version 11 has been added to the tool making the partitioning easier to create and maintain.

The syntax of the bounding expression is tied to the partitioning strategy adopted and has different forms of writing, thus pgModeler helps the users by creating a template expression when a new partitioning relationship is being created. 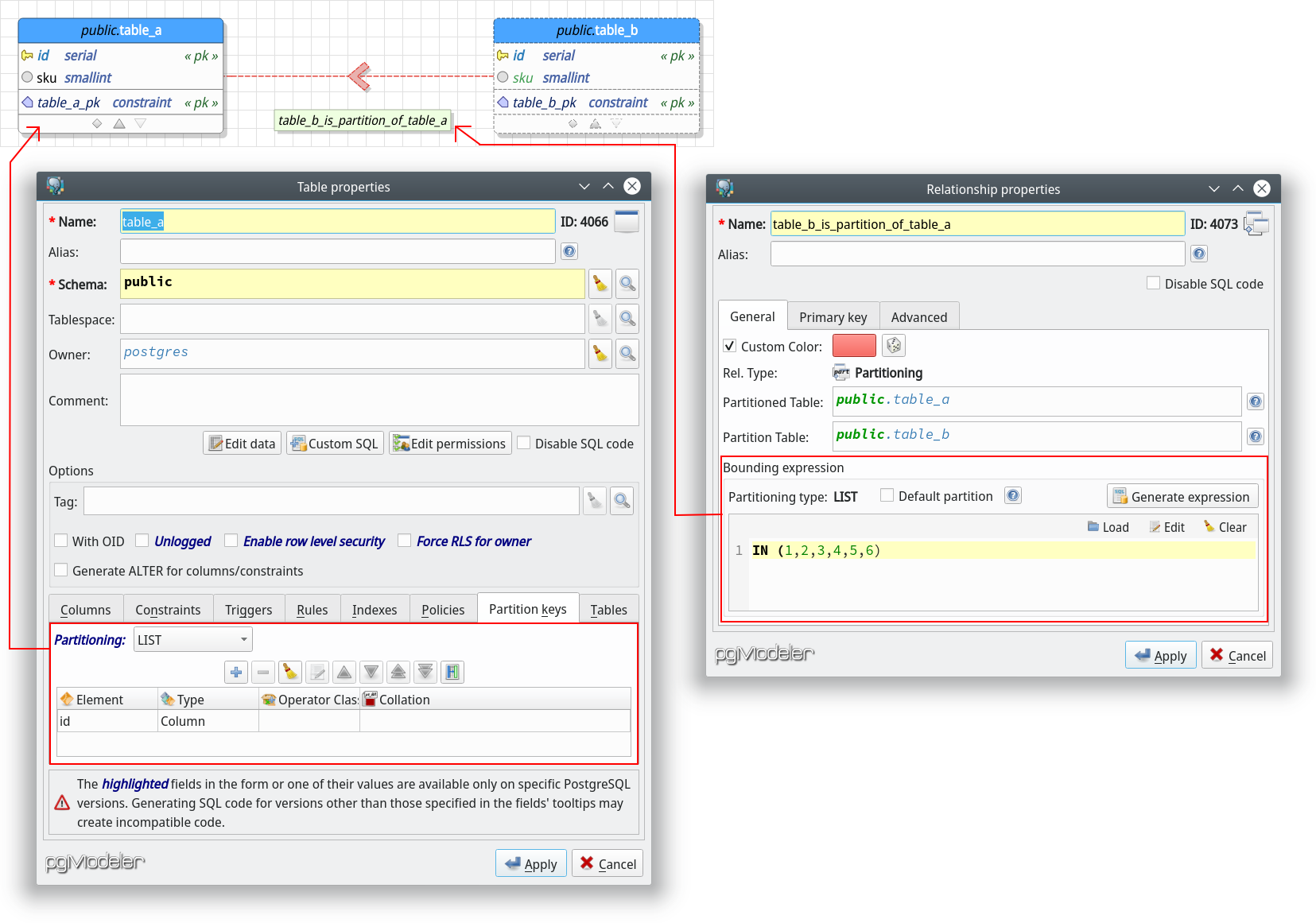 Relationship constraints are the same as the ones used for tables but the only difference is that they can only reference relationship attributes. These objects are added to tables likewise the attributes. Except for primary keys, all other types of constraints can be created for relationships. Primary keys are treated in a special way as described in the next section.

Being the most complex objects in pgModeler, relationships have an editing form that tries to minimize this complexity by separating fields in different sections. This dialog is a polymorphic one, meaning that some fields will be absent depending on the relationship type. All the fields in the form are described as following. In the General section is where basic details of the relationship are configured. They are detailed in the next table.

In the Settings tab is where the user configures the majority of attributes of the relationship. This tab is not available for all kinds of relationships. The fields of this tab are described below. 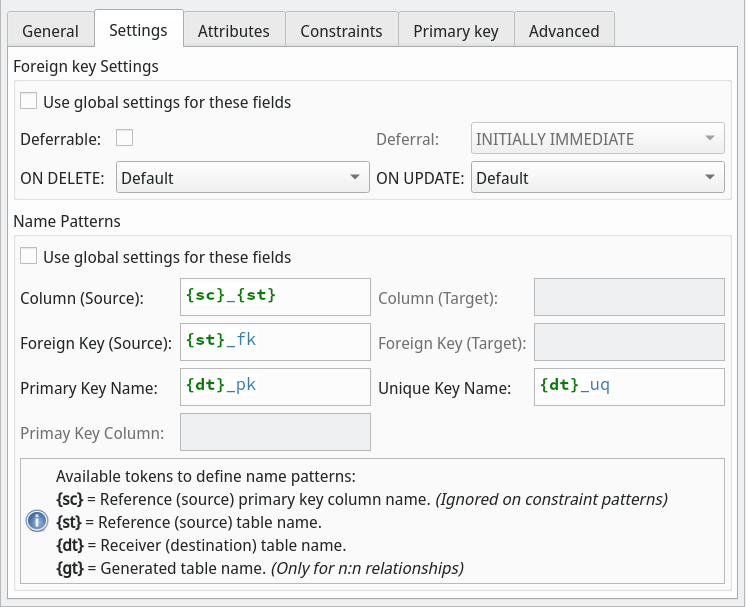 The remaining tabs on the relationship form are described as following:

The column propagation is a powerful mechanism implemented by pgModeler. It can accelerate the productivity by automatically creating columns and constraints as the user link tables using relationships. The only downside of this feature is the lock in any created object, meaning that user can't change any of their attributes including names. In order to workaround this issue pgModeler has the ability to define name patterns that are parsed during relationship creation time and used to generate the name of any object allocated.

Basically, patterns are the joint of predefined tokens and additional characters added by the user. Four are the recognized tokens: {sc}, {st}, {dt} and {gt}. Note that any token must be enclosed in {} to be parsed by pgModeler. The meaning of each token is decribed below:

To clarify the token usage, let's take a look on the image below. The relationship links tableA to tableB, in this case, the first is the source or reference and the last one the destination or receiver because it is that table which receives all generated objects. Note the column id_tableA on tableB, this column was generated through the pattern {sc}_{st} where {sc} is replaced by the primary key column id of the table tableA and {st} replaced by the name of reference table, again, tableA.

The same rule is valid for the generated foreign key tableA_fk, the name pattern used was {st}_fk. In this case there is a static text _fk that is kept when pgModeler translates the pattern, this because the text is not enclosed by {} as the rule states. The user can specify at most six name patterns, being them: two for columns, two for generated foreign keys, one for primary key and one for the generated unique key. Not all fields will be enabled at the same time this because the use of a specific name pattern is conditioned to the relationship type currently being handled.